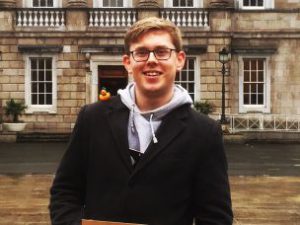 Steven Egan is currently a first year PhD candidate at Queen’s University Belfast. Egan
received his B.A. in History and Politics fromUniversity Belfast in 2016 and
completed his M.A. in History at Queen’s in September 2017. During his undergraduate
studies, he won a scholarship place on the inaugural QUB-Vanderbilt University ‘Maymester’
class (2015) and was also awarded the coveted Julie-Ann Statham prize for academic
achievement (2016). His recent projects include the Dáil Éireann courts of County Offaly and
a history of the Credit Union Movement within Offaly, specifically examining the Kilcormac
Credit Union.

His PhD thesis, which is supervised by Marie Coleman and Margaret O’Callaghan, is entitled
‘The Partition of Ireland in the transnational perspective of the Commonwealth,’ and aims
to contribute to the fields of Commonwealth, diasporic and transnational history. More
broadly, Egan’s research interests broadly cover twentieth-century Irish history, especially
within an Offaly context. Egan remains keenly interested in contemporary British, Irish and
European politics, with a peculiar interest in International Relations. In 2017, Egan was
awarded a ‘highly commended’ distinction from the prestigious Undergraduate Awards in
Dublin for his political discussion of the importance of the bilateral Anti-Ballistic Missile
Treaty, 1972-2002.
Specifically on Offaly, his recent projects include the Dáil Éireann courts of County Offaly
and a history of the Credit Union Movement within Offaly, specifically examining the
Kilcormac Credit Union.

As the War of Independence was fought militarily across the island of Ireland, another,
understated campaign was taking places in the local towns and parishes of Ireland. In the
battle for the hearts and minds of the Irish people, the Dáil courts are an underappreciated
aspect of Ireland’s revolutionary past, which is not yet fully appreciated within Irish
historiography.
This talk on the Dáil courts of Offaly examines the nature of these courts, asking what were
they? Where did they come from? Why were they needed? Who used these courts? Using
the original court records, Bureau of Military History witness statements, R.I.C. records and
local press coverage, the history of the Offaly courts will be mapped out geographically,
offering new insights into Offaly’s experience of the revolutionary years. 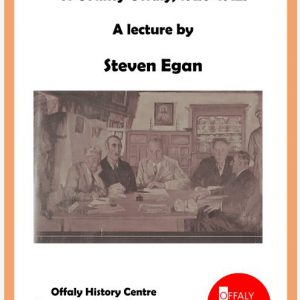